The Fall of the Wall 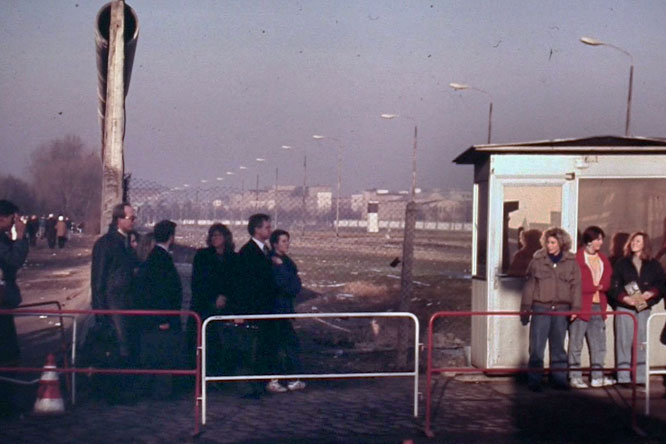 The fall of the communist government in neighboring Poland’s 1989 Polish legislative election in June played a role in the fall of the Berlin Wall. Also in June 1989 the Hungarian government began dismantling the electrified fence along its border with Austria (with Western TV crews present), and then, in September, more than 13,000 East German tourists escaped through Hungary to Austria. This set up a chain of events. The Hungarians prevented many more East Germans from crossing the border and returned them to Budapest. These East Germans flooded the West German embassy and refused to return to East Germany.
St. Nicholas Church in Leipzig has become a symbol of the reunification of Germany.

The East German government responded by disallowing any further travel to Hungary, but allowed those already there to return to East Germany. This triggered similar events in neighboring Czechoslovakia. This time, however, the East German authorities allowed people to leave, provided that they did so by train through East Germany. This was followed by mass demonstrations within East Germany itself. Despite the policy of state atheism in East Germany, Christian pastor Christian Führer regularly met with his congregation at Leipzig’s St. Nicholas Church for prayer since 1982. Over the next seven years, the Church grew, despite authorities barricading the streets leading to it, and after church services, peaceful candlelit marches took place. The secret police issued death threats and even attacked some of the marchers, but the crowd still continued to gather. Protest demonstrations spread throughout East Germany in September 1989. Initially, protesters were mostly people wanting to leave to the West, chanting “Wir wollen raus!” (“We want out!”). Then protestors began to chant “Wir bleiben hier!” (“We are staying here!”). This was the start of what East Germans generally call the “Peaceful Revolution” of late 1989. The protest demonstrations grew considerably by early November. The movement neared its height on 4 November, when half a million people gathered to demand political change, at the Alexanderplatz demonstration, East Berlin’s large public square and transportation hub.[108] On 9 October 1989, the police and army units were given permission to use force against those assembled, but this did not deter the church service and march from taking place, which gathered 70,000 people.[105][106] Many of those people started to cross into West Berlin,[citation needed] without a shot being fired.

The longtime leader of East Germany, Erich Honecker, resigned on 18 October 1989 and was replaced by Egon Krenz that day. Honecker had predicted in January of that year that the Wall would stand for 50 or 100 more years if the conditions that had caused its construction did not change.

With the support of the European Erasmus+ programme.